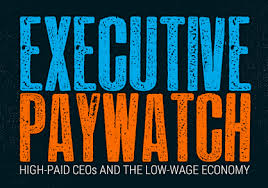 This 2015 edition of Paywatch focuses on Walmart, where the CEO of the nation’s largest employer, Doug McMillon, earns $9,323 an hour compared to an entry-level Walmart employee earning just $9 an hour. Paywatch also highlights the wealth of the six Walton family members who have more wealth than 43 percent of America’s families combined.

To help keep CEO pay in check and make sure working families are compensated properly, Congress passed a law five years ago that requires all publicly traded companies to disclose the ratio between the CEO and its median worker. But Wall Street and big corporations continue to lobby hard to prevent the Securities and Exchange Commission (SEC) from enforcing this rule.

An online petition has been created to call on the SEC to require companies to disclose their ratio of CEO to median employee pay.

There is also an Executive Paywatch toolkit available with several graphics and other materials to help promote the report’s findings.