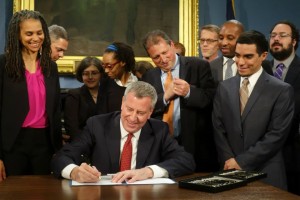 Thanks to the advocacy of the RWDSU and other organizations, New York City Mayor Mayor De Blasio signed the strongest piece of legislation in the country banning discriminatory credit checks.

Last week, New York City Mayor Mayor Bill De Blasio signed the strongest piece of legislation in the country banning discriminatory credit checks. The “Stop Credit Discrimination in Employment Act,” will ban employers in NYC from requesting or using someone’s personal credit history for hiring, promotion, or job-retention decisions. The bill will eliminate the unnecessary red tape where a credit check is often an arbitrary obstacle to employment in some of the largest job sectors, such as retail and restaurant positions. The legislation passed thanks to the advocacy from several groups including the NYC Coalition to Stop Credit Checks in Employment. The coalition is made up of more than 75 partners including the RWDSU and the Retail Action Project (RAP). A RAP member attended the bill signing at city hall to help represent the retail workers who will see the positive impacts of the legislation.

“For too many New Yorkers there has been a vicious cycle. Their credit rating has been damaged when they have been unable to pay off the debts they have accumulated living in one of the most expensive cities in the world or receiving an education or covering an unexpected medical expense,” said RWDSU President Stuart Appelbaum. “They need jobs to pay off their debts, but their credit rating has prevented them from getting employed and they only fall further into debt. You need a job to pay off your debt, but then you can’t get a job because of the debt you already have. This law will help to break the cycle. It will give working people the opportunity to earn their way out of debt.”

Nearly half of U.S. employers now check job applicants’ credit histories when making hiring decisions. This practice blocks qualified workers from desperately-needed jobs — including people whose credit was damaged as a result of medical debts, divorce, layoffs or other life events beyond their control.  Employment credit checks also discriminate against low-income workers and people of color, who have been disproportionately affected by predatory lending and the economic downturn.