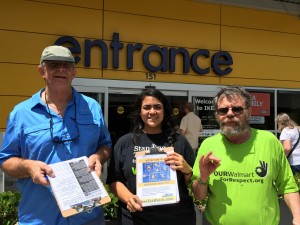 Members of OUR Walmart joined with union workers and community volunteers to educate customers about IKEA’s efforts to avoid paying taxes.

IKEA has taken tax avoidance to a whole new level. The world’s largest furniture retailer has a complicated organizational chart that ensures that most of the money spent at IKEA winds up in the non-profit Stichting Ingka Foundation, based in the Netherlands. From there, billions of dollars flow to another Netherlands non-profit, the IKEA Foundation.

As a non-profit, the IKEA Foundation helps the company save on its tax bill. The foundation paid just 5.6% in taxes last year, while a for-profit corporation in Sweden would pay 20%.

A coalition of IKEA customers and neighbors are spreading the word about IKEA’s shady non-profit status. On Monday, members of OUR Walmart joined with union workers and community volunteers to educate customers at the IKEA store in Sunset, Fla. The group distributed flyers and collected signatures to petition IKEA to pay its fair share of taxes.

You can help by signing the petition at ikeataxwatch.org.