Members from UFCW Locals 75 and 1059 from Ohio traveled to the Capitol in Columbus last week to speak with legislators about passing laws that will make life better for workers and the communities they live in. UFCW members the state overwhelmingly support a bill that would increase the state minimum wage to $10.10. They also took time to talk to legislators about how harmful “right-to-work” laws are to working families.

“I’m here to support working people everywhere who need a voice,” said Matthew Brooks, a UFCW Local 75 member who works at Kroger. “ Raising the minimum wage matters to everyone I know. We see too many working people in Ohio who are struggling to pay rent and put food on the table. Politicians don’t pay attention to these problems unless we bring it directly to them.”

From SB-5, which would have curbed collective bargaining rights for public workers to the possibility of a right to work law, members in Ohio were aware how important it is to lobby.

“We have to take an active role in supporting elected officials who support us,” said Jeremy Clark, a UFCW Local 1059 member who works at Kroger. “I’m here to hold them accountable and tell them what our goals are. Nothing speaks louder than a face-to-face interaction.”

“Lobbying has become a necessity for workers,” said Whitney Williams, a member of UFCW Local 75 who works at Kroger. “What goes on in this building affects my insurance, my wages, and my future. People need to be involved and informed. If we don’t take the time to lobby, no one will take our concerns seriously.”

The vast majority of UFCW members in Ohio work at grocery stores. Their experience hearing daily about what people in their communities are going through gave their conversations with lawmakers’ added weight.

“I see so many hard working people not getting by and rather than just gripe about it I decided to be here so I could get involved in making life better for working people,” said Todd Ludwig, a UFCW Local 75 member who works at Kroger. “I want to see the minimum wage go past $10.10, $12 seems more reasonable to me. I challenged the legislators I spoke with to try to live on minimum wage to help further their understanding of how inadequately low it is.”

Another UFCW Local 75 member, Letitia Finley, who works at who works at Kroger, echoed Ludwig’s feelings about UFCW members advocating for every worker in Ohio.

“We are here to represent every worker, not just UFCW members,” Finley said. “Decisions that happen inside the Capitol affect so many people. We have to be here to make sure those decisions benefit us.”

As the day came to a close, UFCW members were looking forward to going home and sharing their lobbying experience with coworkers.

“When it comes to making our lives better, politics is an important piece of the puzzle,” said Josh Greenlee, a UFCW Local 1059 member who works at Kroger. “From right to work to the minimum wage, we need to make sure legislators know where we stand. I’m here to fight for my community and make life better for everyone in it. I can’t wait to go back to my store and tell my coworkers all about today.”

“This was my first lobby day and it was a lot better than I thought it would be,” said Local 75 member Whitney McKelton who works at Kroger. “I got to speak with my Senator about what’s important to me and my family. Being here made me realize how much legislators affect our lives. If they hear from workers it will make it more likely that the laws they pass will work for us.” 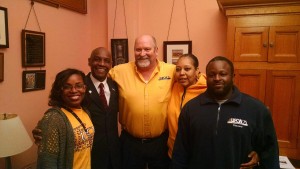 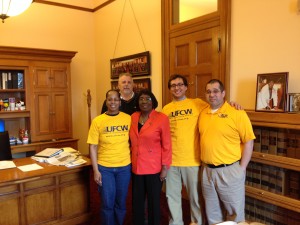