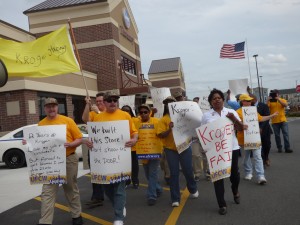 Kroger workers, customers and community allies gathered in front of the Frederick Boulevard Kroger last week to protest the company’s unfair treatment of union store workers. The company closed the Portsmouth Kroger Food & Drug store on Saturday and is transferring most the store’s union workforce to a store in Yorktown, 25 miles away.

Store workers delivered a petition to Kroger requesting that workers be allowed to transfer to a local Kroger Marketplace store instead. Hundreds of customers have pledged not to shop at either of the newly opened Kroger Marketplace stores until the Kroger grocery store workers are allowed to transfer to a local store while retaining their union benefits and wages. More than 60 workers have requested this transfer.

“It’s been hard saying goodbye to coworkers that just can’t make the 50 mile round-trip to the new store. We’ve built our lives around this store and the Portsmouth community,” said Laverne Wren, who has worked for Kroger for 16 years. “Kroger signed a contract with us to protect our jobs if the company ever chose to close our store. But this false choice – commute or quit – was never part of our contract.”

Many workers will lose their jobs if they cannot find transportation to Yorktown. Nick Roe, who has special needs, has worked for Kroger for 17 years. He cannot drive, and relies on his parents to drive him to and from work each day. If Nick is not allowed to transfer to the local Kroger Marketplace, his ability to keep a job he loves will rely on his parents’ ability to drive 100 miles each day. Other workers are weighing the toll that this commute will take on their families. Michael Cowan works the overnight shift in order to share childcare duties with his wife. The long commute means that the family will have to start sending their young daughter to daycare during Michael’s commute.

“Kroger is deliberately expanding its non-union stores with the acquisition of Harris Teeter, and with this new tactic of building non-union Kroger Marketplaces, and then pushing loyal union workers out of town,” said Mark Federici, President of the United Food and Commercial Workers Union (UFCW) Local 400. “If we want to keep good jobs in Portsmouth, then it is time for all workers – grocery and Marketplace – to have a union voice at Kroger.”

The union contract negotiated between Kroger and UFCW Local 400 stipulates that in the event that Kroger closes a store, the company will transfer workers to another union store. Kroger Marketplace stores are non-union and do not offer the same pay or benefits guaranteed by the union contract.

“The High Street Kroger workers are members of the Portsmouth community. They are our friends and neighbors,” said James Boyd, President of the Portsmouth branch of the National Association for the Advancement of Colored People (NAACP). “We are out here today because we believe that good jobs are essential to the strength of this community. We want Kroger to be a partner in strengthening our community by keeping good jobs and loyal employees in Portsmouth.”

View footage of the protest by WAVY Channel 10 News. 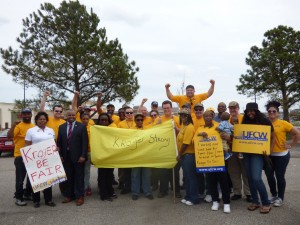 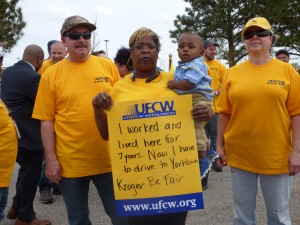