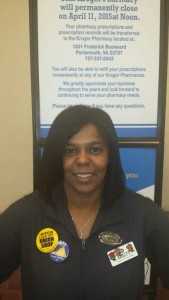 UFCW Local 400 member Laverne Wrenn wrote an op-ed about how Kroger is forcing her and her coworkers to travel more than 50 miles roundtrip if they want to work at another union Kroger store after their current one closes.

Laverne Wrenn, a UFCW Local 400 member who works at a Kroger in Portsmouth, Virginia, wrote an op-ed that was published in the Virginian-Pilot.

In her op-ed, Laverne discusses how she and her coworkers have been preparing for the upcoming closure of her store. She says it will be hard to say goodbye to the customers whom she has known and served for 17 years, but what’s worse is that she and her coworkers will lose their jobs unless they are able to make a 50-mile, round-trip commute to the nearest unionized Kroger store in Yorktown, Virginia.

Laverne says that putting dedicated Kroger employees in this situation is irresponsible and unfair. She and her coworkers are active members of their Portsmouth community, and do not want to leave their communities, or they simply can’t.

Lavern’s coworker Nick, who has special needs, has been a fixture in their store where he scans and bags groceries, thanks to his “open smile and dedication” to the neighbors who shop in their store. On his days off, Nick volunteers with the Portsmouth Fire Department. Nick’s parents, who live near the Kroger, have been able to drive him to work for the last 16 years.

By closing their unionized workplace, Kroger is hurting workers like Laverne, Nick, and another employee who can’t drive due to medical reasons. Driving 50 miles twice a day is out of the question for many commuters, and impossible for those who can’t drive themselves. So although Kroger has a legal obligation to transfer their employees to other stores, they are essentially forcing many of these hard workers to quit.

“All of us who work in the High Street store are members of the Portsmouth community. We live here and send our children to the neighborhood schools. Many of my co-workers walk or take the bus to work; they do not own a car. We have built our lives around this store and this community. But now Kroger is giving us just one month’s notice to transfer to a store 25 miles away or lose our jobs.

Kroger signed a contract with us to protect our jobs if the company ever chose to close our store. This false choice – commute or quit – was never a part of our contract.”

There are two other Kroger stores in the Portsmouth area, however Kroger opened them under their Marketplace brand, as non-union. These non-union stores do not offer the types of jobs that Laverne and her coworkers have under their union-contract. “For a job with union wages, pension benefits and a voice on the job, the stores in Yorktown and Virginia Beach are the only options,” wrote Laverne.

Laverne’s op-ed conveys a shift in what Kroger stands for. A company that stands for good jobs, is not a company that is “deliberately expanding its non-union stores by acquiring Harris Teeter, building non-union Kroger Marketplaces and then pushing loyal union workers” out of town. It is the workers who are supposed to have the right to choose whether or not they have union representation–not the company. Kroger needs to respect the choice Portsmouth workers made when they chose to be union members.

Laverne urges all employees working at stores under the Kroger banner to fight for representation, to stop things like this from happening: “It is time for all Kroger Marketplace workers to make that choice. Together, we can keep good jobs and good workers in Portsmouth and strengthen our local economy.”

A rally will take place at the Portsmouth, Va., Kroger on Friday, April 10th, to demonstrate support for Kroger workers they demand the right to transfer to closer stores with all of the benefits and protections of a union contract. You can also show your support for the workers by signing the online petition.