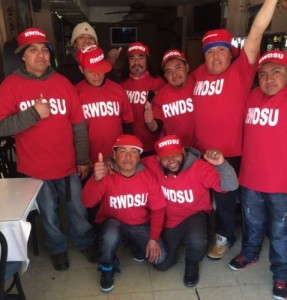 After a more than four-month strike,  ‘carwasheros’ at Vegas Auto Spa in New York City won a landmark contract agreement. The two-year agreement includes two wage increases, paid time off, fair sharing of hours and overtime, a grievance procedure and  protection for immigrant workers. It is the strongest contract won in the industry with higher wages, more paid time off and the $1,500 signing bonus.

“This is a perfect example of what can happen when courageous workers stick together in the face of adversity,” said RWDSU President Stuart Appelbaum. “These brave carwasheros spent four months on the picket line, without an income, in a very cold winter. They understand the difference being in a union can make, and I am proud they are part of the RWDSU.”

The Vegas workers went on strike on Nov. 20, 2014, shortly after they sued their employer for unpaid wages. The owner also agreed to settle a suit the workers filed for wage and hour violations. The deal also came a month after ‘carwasheros’ from across the city, joined by hundreds of  labor leaders, elected officials, advocates and community supporters, staged a major march and protest at the car wash.

Other officials who support the car wash workers include City Council Speaker Melissa Mark-Viverito. She is the lead sponsor of the Car Wash Accountability Act, which would regulate the industry, require licensing, and include strong worker protections. The bill is pending in the City Council.

WASH NY officials said the strike, and the workers’ wage theft allegations demonstrate the need for the City Council to pass – and Mayor de Blasio to sign — the Car Wash Accountability Act.