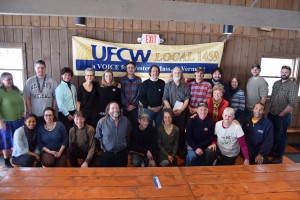 Dozens of co-op workers met Saturday at the first-ever regional co-op workers summit. The workers are from Massachusetts, Vermont, and New York, and represent both worker- and member-owned co-ops. The event, hosted by UFCW Local 1459, was the first of its kind.

UFCW member and non-member co-op workers gathered for panels on the future of the co-op movement and their role in improving their workplaces and communities. They also heard from Frances Moore Lappé, best-selling author of Diet for a Small Planet, who spoke about the important role that co-ops and co-op workers can have in building a more sustainable global economy.

“It’s critically important that the co-op movement doesn’t leave the workers’ voice behind,” said John Cevasco, a grocery worker from Greenfield’s Market in Greenfield, Mass., and a UFCW Local 1459 member. “We found our voice at Greenfield’s by forming a union, and I know our co-op is stronger because of it.”

“Our communities need high quality, local food, and good family-supporting jobs,” said Russell Ziemba, a worker from the Honest Weight Food Co-op in Albany, N.Y. “Co-ops can play a critical role in meeting those needs if they listen to the voice of their workers. That’s why I’m glad I had the opportunity to be here and learn from other co-op workers in my region.”