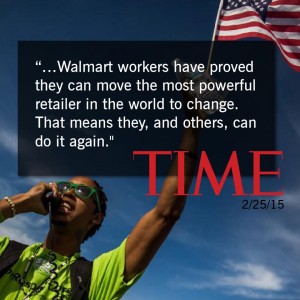 After years of mounting pressure, OUR Walmart members, community supporters, and union members won a raise for 500,000 Walmart workers just last month. The company announced that it would raise wages to $9 by this April and a $10 minimum by 2016.

While every little bit helps, $10 an hour isn’t enough to raise a family – especially when there’s no public commitment to providing workers with access to the hours they need. That’s why it is important to keep the pressure up and grow the movement to continue to make change at Walmart. On April 1st, communities, union members, and Walmart workers will be leafleting workers and shoppers across the country. Learn more about how you can be involved in this day of action by joining the conference call on Wednesday evening.

A company with $16B in profit annually, owned by the richest family in America, can afford to do better for workers. Workers are standing up and winning, but there’s still a long way to go. That’s why it’s so urgent to spread the news that change is possible to Walmart workers across the country.