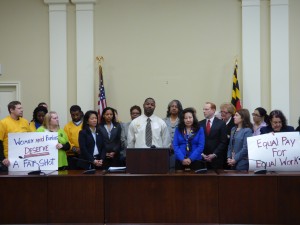 Retail workers from IKEA and Walmart stores in Maryland went to Annapolis last week to testify in favor of a bill to help hourly workers by guaranteeing predictable schedules.

Maryland legislators are taking on the unpredictable scheduling practices that wreak havoc on the lives of retail workers. Maryland State Delegate Sheila Hixson, and State Senator Joanne Benson have introduced the Fair Scheduling Act (HB 969/SB 688), a bill to help hourly workers by guaranteeing predictable schedules so that workers can plan ahead to meet their responsibilities on and off the job.

Retail workers from IKEA and Walmart stores in Maryland went to Annapolis last week to testify in favor of the bill before the House Economic Matters Committee.

Derek Dutch, a forklift driver and warehouse worker for IKEA, gave testimony on how predictive pay requirements in the bill would discourage employers from cutting shifts short. The bill would require employers to pay workers for a minimum of four hours, or the full length of the shift if the shift is cancelled or shortened without adequate advance notice. For workers like Dutch, the Fair Scheduling Act is about the respect of being paid for the hours that he is scheduled to work.

“In Sweden, IKEA sets schedules a full year in advance and helps workers get the full-time hours that their families need,” said Dutch, who works at IKEA in College Park. “But in Maryland, IKEA schedules me for a five-hour shift and punishes me for working harder and faster by cutting me early and not paying me for the full scheduled shift. We can do better for Maryland families.”

Cynthia Murray, a Walmart Associate and leader with OUR Walmart, testified to the need for advance scheduling at Walmart. The bill would end just-in-time scheduling by requiring employers to post schedules 21 days in advance.

Hourly workers make up half of Maryland’s total workforce, and are more likely to experience volatile, precarious schedules and incomes. Nearly 600,000 of Maryland’s hourly workers would be positively affected by the proposed legislation.