Retailers Starting To Get The Message: It’s Time to Raise Wages 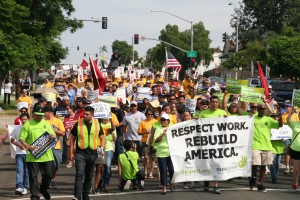 Walmart announced that the company will be hiking wages for 500,000 of its employees nationwide after years of pressure from members of OUR Walmart and the UFCW.

This month, Walmart announced that the company will be hiking wages for 500,000 of its employees nationwide, raising pay to $9 an hour in April and $10 an hour by February of 2016. This decision came after years of pressure from members of OUR Walmart, who have bravely been standing up to the world’s largest retailer for better pay and regular hours. With the support or UFCW members and community organizations, workers are winning change.

Unlike many retail workers, UFCW and other union members are able to raise wages at companies by bargaining strong contracts. Union members also help raise the bar in the retail industry by joining Walmart workers to stand up to competitors like Walmart and pressuring them to raise wages.

In Forbes, Walmart spokesperson Kory Lundberg directly responded to the petition for $15 per hour and full-time schedules, saying, “The door is open for associates who want to work full time and earn $15 an hour, all they have to do is walk through it.”

While it’s only a step, this victory is full of the promise of more change to come – at Walmart and beyond. As TIME magazine reported, “Walmart workers have proved they can move the most powerful retailer in the world to change. That means they, and others, can do it again.”

As Paul Krugman said in the New York Times, “The announcement is nonetheless a very big deal, for two reasons. First, there will be spillovers: Walmart is so big that its action will probably lead to raises for millions of workers employed by other companies. Second, and arguably far more important, is what Walmart’s move tells us — namely, that low wages are a political choice, and we can and should choose differently.”

Other retailers are already following suit. In the last week of February, TJ Maxx, Marshall’s and HomeGoods announced they will raise their minimum wage to $9 an hour in June and to $10 in 2016. Many speculate that other big name retailers aren’t far behind. The New York Times editorial board says, “raises at Walmart could well lead to raises elsewhere as competitive pressures force Target, Home Depot and other low-wage retailers to follow suit.”

While companies may cite different reasons for joining the bandwagon, one thing is clear – workers are standing together and creating an important discussion around inequality and the minimum wage in our country. In the last several years, paying decent wages has become part of the national conversation in an unprecedented way.  Cities like San Francisco, Chicago, and Seattle have passed their own legislation raising the wage in the next several years. Twenty-nine states, plus the District of Columbia, have set their minimum wage above the federal level as of January, 2015. Congress has even proposed a bill that would raise the federal minimum wage to $10.10 an hour.

Union members are able to use their collective voices to raise wages at their companies by not only bargaining strong contracts, but also by standing up to competitors like Walmart and pressuring them to raise wages. These recent events have shown that when workers stand together, they can start to change companies – even companies as big as Walmart.