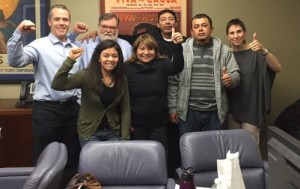 Workers at the East Tremont Car Wash in the Bronx signed a union contract with their employer, providing wage increases and crucial worker protections.

Workers at the East Tremont Car Wash in Bronx, New York, have signed a union contract with their employer, providing wage increases and crucial worker protections. This is the eighth car wash in New York City where workers have ratified a union contract.

The “carwasheros” at the shop voted overwhelmingly to join the RWDSU last August. Workers at ten car washes in the city have voted to join the union.

The two-year contract calls for many improvements including wage increases in each year of the agreement, fair scheduling, better access to overtime work, paid time off, increased protections for immigrant workers, and a grievance procedure to protect workers and handle workplace issues.

The contract comes in the third year of the WASH New York campaign, a joint effort by New York Communities for Change and Make the Road NY, supported by the RWDSU, that has worked to clean up the car wash industry and improve conditions for the workers. The city’s car washes are staffed mostly by immigrants who make minimum wage or less and who often have been denied overtime pay to which they are entitled by law.