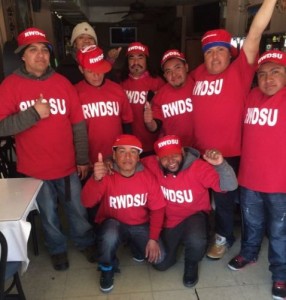 Workers at the Vegas Auto Spa in Brooklyn, New York, voted unanimously to join the RWDSU.

Workers at the Vegas Auto Spa in Brooklyn, New York, voted unanimously to join the RWDSU after going on strike in late November complaining of stolen wages and unsafe working conditions.

They are the tenth New York City car wash to join the RWDSU.

“The boss treats us unfairly, and makes us sign papers that aren’t true, saying he’ll fire us if we don’t,” said Angel Rebolledo of Brooklyn, who has worked at Vegas Auto Spa for two years.  “He says that he pays his workers overtime, but he doesn’t.  He claims that we make more tips than what we actually do.”

The Brooklyn workers say they’ll stay on strike until a fair contract is signed.

“We are hoping for more protection, like gloves and glasses,” said Rebolledo. “We want to be paid according to the law.”