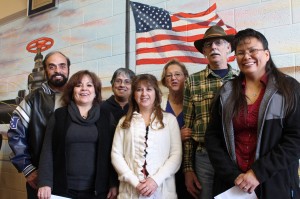 Workers in New Mexico attended a right to work training session led by UFCW Local 1564 to learn how much harm right to work legislation would bring to workers.

Last week, UFCW Local 1564 led a right to work training session for more than 100 New Mexico union members. At the training, members learned how much harm right to work would bring to workers in New Mexico.

For the first time since 1952, New Mexico’s State House is controlled by Republicans. One of the State House’s priorities going into the 2015 legislative session is to dismantle the rights of workers and pass an unfair right to work law.

“I currently work at Albertson’s and have been a UFCW member for over 40 years,” said UFCW Local 1564 member Eddie Burns. “I’m very concerned about the possibility of right to work in New Mexico. This will hurt our ability to stick together and bargain for the fair wages and benefits that we deserve. It just seems like a completely unfair law to both working and middle class families.”

To some UFCW Local 1564 members, right to work was not new to them. Paul Bolton, a meat cutter at Smith’s in Albuquerque, recalled how much worse his job was when he worked in Texas, a right to work state.

“When I worked in Texas I had the same job as I do now in New Mexico only I had less pay, fewer benefits and absolutely no job security,” he said. “The health care was even worse – when I had my child I was forced to pay an enormous amount out of pocket. It was hard to afford. If that happened while I was working here in New Mexico it would not have been so stressful.”

Workers left the training ready to stop right to work by lobbying their legislators at the Capitol in Santa Fe.

“I’m looking forward to lobbying in Santa Fe,” said Maria Ana Griego, a UFCW Local 1564 member who works at Smith’s. “Legislators from New Mexico should help people from New Mexico and they need to hear that from workers like us. Right to work just gives more to outside corporations. It’s workers who need more – not corporations.”