OUR Walmart Protests on the Anniversary of Citizens United 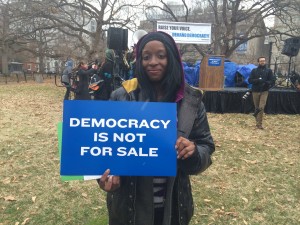 OUR Walmart leaders in the DC area joined with Public Citizen to protest the five-year anniversary of the controversial supreme court case, Citizens United.

Today, OUR Walmart leaders in the DC area joined with Public Citizen to protest the five-year anniversary of the controversial supreme court case, Citizens United. Since the court’s decision in 2010 saying corporations are people, big companies and billionaires have had extreme influence on our electoral process with their large political donations. Meanwhile, working people are left with little say in our political system because they can not compete with those large donations.

“While I struggle to keep a roof over my family’s heads, Walmart and the Waltons have endless money to spend on elections. Political donations from companies like Walmart help keep my wages low,” said Fatmata Jabbie, an OUR Walmart member, to the crowd on Wednesday. “A higher minimum wage would make a huge difference for families like mine; and the majority of Americans support raising the minimum wage. Yet Walmart spends huge amounts of the fortune me and other Walmart workers have helped build to stop this from happening.”

The Waltons, who are worth more than 43% of American families combined, actively spend billions on policies and politicians that undermine public education, hurt small businesses, and prevent workers from speaking out on the job. Meanwhile, Walmart pays its workers such low wages that many are forced to depend on food stamps or other government programs just to make ends meet. Learn more about how Citizens United impacts working people here.