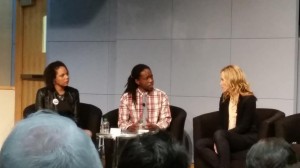 OUR Walmart member Colby Harris was among the panelists and addressed the crowd about his first hand experience living on less than liveable wages at Walmart.

Senator Elizabeth Warren was a commanding presence during the event, speaking about how raising the minimum wage is imperative to decreasing inequality. “Trickle-down economics was nothing more than helping the rich and powerful get more rich and powerful,” she said.

Labor Secretary Tom Perez echoed Warren’s statements and talked about how working together will lead to success in creating a fair system for all: “You shouldn’t have to win the geographic lottery to get a good wage.”

OUR Walmart member Colby Harris was also among the panelists and addressed the crowd about his first hand experience living on less than liveable wages at Walmart, as well as being retaliated against by his employers when advocating for better pay.

International AFL-CIO president Richard Trumka also spoke, urging that raising wages, “is not a hobby. It’s our mission. It’s a beginning, not an ending.”

He also talked about the labor federation’s plans to immediately launch #RaiseTheWage campaigns and summits in additional cities. Part of these campaigns, he also added, is the fight for state and local paid sick days and equal pay for men and women, as well as people of all races.

The 2015 Raising Wages campaign will continue with two projects following the national summit. For the first project, the state federations of labor will hold Raising Wages summits in the first four presidential primary states—Iowa, Nevada, New Hampshire and South Carolina—beginning in Iowa this spring. These summits will bring together diverse voices to lay out the entire Raising Wages platform and establish state-based standards of accountability. For the second project, the AFL-CIO will take the Raising Wages campaign to seven cities around the country: Atlanta, Columbus, DC (Metro), St. Louis, Philadelphia, Minneapolis, and San Diego.

A live stream video from the Summit is available here. 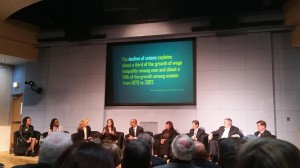 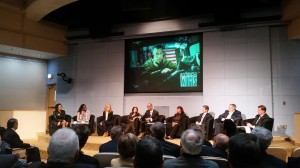