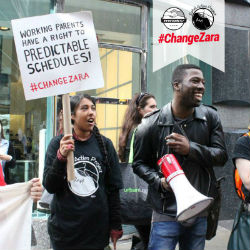 The RWDSU/UFCW and UNI Global Union have been calling on Inditex to support its Zara workers in the U.S. and across the globe.

In 2009, Zara’s parent company Inditex signed an international framework agreement with UNI Global Union committing to treat workers fairly and respect their right to organize. As a result, Zara employees all over the world have been able to choose a union voice and work together to improve their jobs. Zara is an international clothing retailer and has more than 2,000 stores across 88 countries.

But it’s been a different story in the United States. Zara workers here say they face low wages, inconsistent schedules, and that New York City management has capped their hours at 25 per week in order to avoid providing them with healthcare coverage. And Zara USA refuses to refuses to engage with its employees collectively about their working conditions.

The RWDSU/UFCW and UNI Global Union have been calling on Inditex to support its workers in the US and across the globe. Now, we need to speak up and tell the company to honor its agreement.

You can support Zara workers by telling Zara’s parent company Inditex to treat U.S. workers fairly and honor its global agreement in the United States.