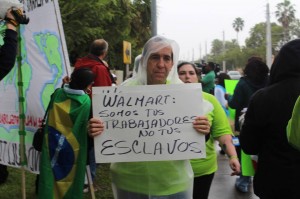 Walmart workers and supporters in Miami are protesting as part of the Walmart worker Global Day of Action, in which Walmart associates worldwide are calling for Walmart and the Waltons to pay decent wages and give access to full-time hours.

Workers around the world want to expose Walmart’s bad labor practices throughout the company’s stores, warehouses and global supply chain.

“I’m working to build the profits of the richest family on the globe, while putting my safety at risk just to go into work,” said one supply chain worker.  “The Waltons need to see and hear what they are doing to families around the globe.  It’s shameful.”

“I am worried about how I’m going to pay for groceries this week while Alice Walton has paid off a US$200 million luxury condo in New York City,” said Emily Wells, a Walmart worker in the US.  “The Waltons are at the center of the income inequality problems that are hurting the global economy and all of our families.”

According to UNI, The Walton family is worth “$150 billion and grows that wealth by more than $8 million a day.  It would take a Brazilian Walmart worker a total of 30 million years to earn the equivalent of the Walton family’s wealth.”

Last week’s protests were a sign of Walmart workers’ growing discontent with the company’s low-road business model. With pressure mounting globally, American workers and their supporters pledge to take action as Black Friday nears. You can get involved by visiting BlackFridayProtests.org. 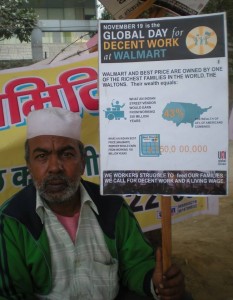 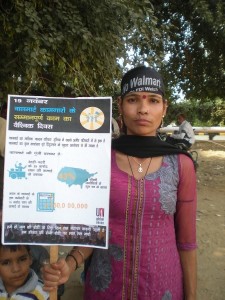