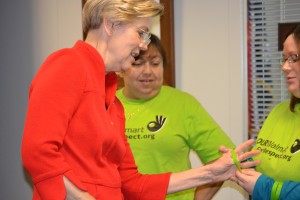 Walmart strikers Evelin Cruz and Cantare Davunt gave Senator Warren a green OUR Walmart bracelet that she wore while presiding over the vote that rejected the Keystone Pipeline. These bracelets are a symbol of courage for the Walmart workers who wear them.

Last week, Senator Elizabeth Warren, Congressman George Miller, and legislative experts held a congressional briefing entitled, Walmart and the Economic Insecurity of American Families, to hear from members of OUR Walmart on how the country’s largest employer is creating an economic crisis for working families in America.

“I was glad to join Walmart employees today to support efforts to push back against practices by Walmart and other big corporations that make it hard for working families to make ends meet,” said Senator Elizabeth Warren (D-MA). “Hardworking men and women across the country want a fighting chance to build a future for themselves and their families. We need to give workers this chance by raising the minimum wage, providing some basic fairness in scheduling, and fighting for equal pay for equal work.”

“Walmart’s shoddy business model is singlehandedly wreaking havoc on American families across the country and making it impossible for hundreds of thousands of workers to have a shot at the American Dream,” said Congressman George Miller (D-Calif.), senior Democrat on the House Committee on Education and the Workforce. “America’s workers and their families deserve better than they’re getting from Walmart today—they deserve higher wages, less erratic schedules, and equal pay regardless of their gender. The courage of Walmart workers who are engaged in sit-down strikes to protest the company’s illegal silencing of workers who have called for better jobs and full-time work is essential to creating real change.”

At the briefing, Walmart workers discussed how Walmart’s low pay, manipulation of scheduling and illegal threats to workers have created a new norm across industries that makes it nearly impossible for workers to hold down second jobs, arrange child care, go to school or manage health conditions.

“With Walmart’s low-wages and hectic schedules, too many Walmart workers are left on the edge of poverty. But all too often when we stand up, Walmart tries to silence us. Just days before I planned to participate in our first sit-down strike in LA, Walmart fired me for speaking up for better wages and hours, but I’m still fighting today because my former colleagues like Fatmata Jabbie and Cantare Davunt deserve better,” said Evelin Cruz, former Walmart employee and OUR Walmart member.

The briefing highlighted the Schedules That Work Act, Fair Minimum Wage Act and Paycheck Fairness Act—legislation that would force the company to improve its pay and hours for hundreds of thousands of American workers. Legislative experts including Carol Joyner of the Labor Project for Working Families, Amy Traub of Demos and Carrie Gleason of the Center for Popular Democracy joined the elected officials and Walmart associates on the panel to discuss the need for legislative action to set a new standard at the country’s largest employer.

The action from elected officials comes as an increasing number of Americans and Walmart workers point to OUR Walmart as making significant changes at the country’s largest retailer. Most recently, after public calls from OUR Walmart, the company committed to raise wages for its lowest paid workers and rolled out a new scheduling system that allows workers to sign up for open shifts. To date, workers at more than 2,100 Walmart stores nationwide have signed a petition calling on Walmart and the Waltons to publicly commit to paying $15 an hour and providing consistent, full-time hours.

“In three short years, OUR Walmart has grown to a powerful, national network that is making big changes at the country’s largest employer,” said Cantare Davunt, a Walmart customer service manager and OUR Walmart member during the briefing today. “But more needs to be done. Legislative action would have a huge impact, but Walmart can lead the way now by adopting policies that give us the schedules and pay we need.”

The briefing comes before next week’s nationwide strikes on Black Friday. Tens of thousands of workers, teachers, voters, clergy, environmentalists, and civil rights leaders will join workers at more than 1,600 protests speaking out against retaliation and calling on Walmart and the Walton family to publicly commit to $15 an hour and provide full-time work.