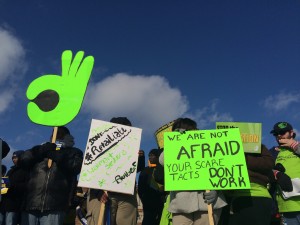 While striking Ohio Walmart workers demonstrated outside stores, community members contributed to food drives to help support Walmart associates and their families during the holidays.

Dozens of Walmart workers and supporters in Cincinnati and in Dayton, Ohio gathered at local Walmart stores last week to call on the company and its owners—the Waltons—to pay a living wage and provide consistent, full-time hours. Walmart workers in both cities went on strike in response to the illegal retaliation associates face when they speak out.

“My family, sometimes we have to choose: pay a bill or buy food? And of course we have to choose food, but then we end up in debt,” says Saria McCollum, a Walmart associate from Dayton, Ohio. “I work for the richest company in the world, and my family has to make that choice. That’s not right. We’re striking to show Walmart that we’re not afraid. Retaliation won’t stop us from speaking out.”

While striking workers demonstrated outside stores, community members contributed to food drives to help support Walmart associates and their families during the holidays. Workers and their supporters say Walmart and the Waltons are driving the income inequality problems that are holding the country back. As the holiday season approaches, many Walmart workers are unable to provide dinner for their families because the world’s richest company pays poverty wages and forces employees onto public assistance like food stamps.

The strikes come at a time when OUR Walmart members have made significant strides toward creating change at the country’s largest employer. Most recently, after public calls from the organization for Walmart to raise pay, the CEO committed to raise wages for the company’s lowest paid workers. Walmart improved its pregnancy policy recently after OUR Walmart members, who are also shareholders, submitted a resolution to the company about its pregnancy policy. And, responding to OUR Walmart members’ growing calls on the retailer to improve access to hours, Walmart rolled out a new system nationwide that allows workers to sign up for open shifts in their stores online. OUR Walmart members have also won back the jobs of workers who were wrongfully fired for speaking out for change.