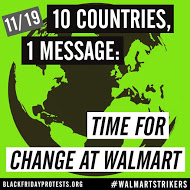 OUR Walmart members will be joining Walmart workers around the world in the “Global Day for Decent Work at Walmart.”

Walmart workers and supporters in Miami will gather in front of Walmart’s global headquarters on Wednesday to call on the company and its owners—the Waltons—to stop hurting families and publicly commit to pay fair wages and provide consistent, full-time work. Even as the mega-retailer brings in $16 billion in annual profits and Walmart’s owners build on their $150 billion in wealth, the majority of Walmart workers are not paid sustainable wages.

In Miami, OUR Walmart members will be joining Walmart workers around the world in the “Global Day for Decent Work at Walmart” and will be delivering petitions from workers at more than 2,100 Walmart stores calling for Walmart to publicly commit to better wages and full-time work. The petition has more than 70,000 signatures and you can sign it to show your support here. Outside the headquarters, Walmart workers will speak about their experiences working under Walmart conditions.

Supported by UNI Global Union, a global union representing 20 million workers from over 900 trade unions worldwide, and its affiliates, Walmart workers in ten countries – including United States, Mexico, and Brazil – are mobilizing to expose Walmart’s low pay and dangerous working conditions throughout the world. The workers are calling on Walmart and the Waltons to publicly commit to paying the 2.2 million workers at its stores and countless more in its supply chain a decent wage and treating them with dignity.

The Waltons are one of the richest families in the world and add $8.6 million to their $150 billion wealth every day. Meanwhile, many workers at their stores, warehouses and along the supply chain face dangerous working conditions, low pay and a life of poverty for their children.