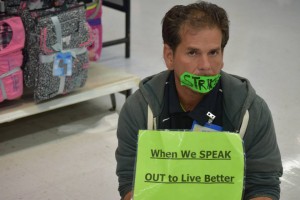 OUR Walmart members from stores throughout California sat down in protest at a Walmart store with tape over their mouths signifying the company’s illegal efforts to silence workers who are calling for better jobs.

Last week, OUR Walmart members, some of whom were part of the first Walmart strike in October 2012, sat down in protest near registers and next to racks of a Walmart store in the Los Angeles area. The group of striking workers, from stores throughout California, placed tape over their mouths signifying the company’s illegal efforts to silence workers who are calling for better jobs. Even as the mega-retailer brings in $16 billion in annual profits and Walmart’s owners build on their $150 billion in wealth, the majority of Walmart workers are paid less than $25,000 a year.

Workers held signs resembling those of the first retail sit-down strike at Woolworth in 1937, when retail workers at the then-largest retailer in the country called for the company to increase pay, provide a 40-hour work week, and stop the retaliation against workers who spoke out.

“I’m sitting down on strike today to protest Walmart’s illegal fear tactics and to send a message to management and the Waltons that they can’t continue to silence us and dismiss the growing calls for better wages and full-time work that workers are raising across the country,” said Kiana Howard, a mother and Walmart striker.

Following the sit down strike, workers and community supports held an action later that evening at a Walmart in Pico Rivera, Calif. Workers and allies sat in front of the Walmart store in a civil disobedience action to continue protests to Walmart’s illegal retaliation against workers.

To date, workers at more than 2,100 Walmart stores nationwide have signed a petition calling on Walmart and the Waltons to publicly commit to paying $15 an hour and providing consistent, full-time hours. After taking the petition to members of the Walton family, supporters committed to returning to stores on Black Friday if jobs aren’t improved by then.

The sit-down strike comes on the heels of a New York Times story on how persistent understaffing at Walmart stores is contributing to wasted food, un-stocked shelves and lower sales. For the past three years, workers have been raising concerns about understaffing and the impact on the company’s well-being with managers, shareholders and executives. Investors and analysts are also reacting today to the company’s third-quarter financial reports, which indicate that persistent staffing problems are keeping the company from improving customer traffic and growing the business. 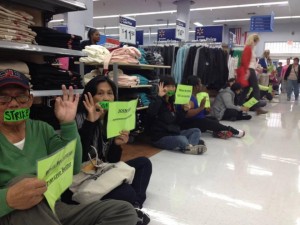 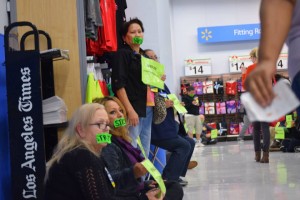 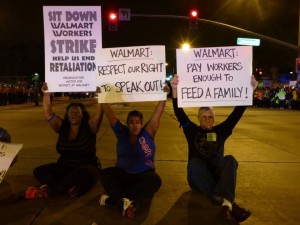 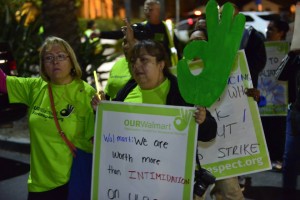 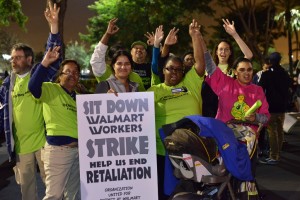