We Want to Work Full-Time: IKEA Worker Speaks Out 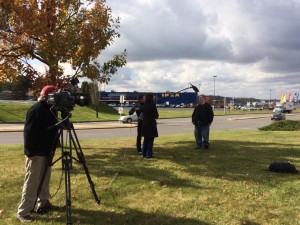 Dan Stillwell, a part-time worker from the IKEA store in Pittsburgh, Pa., spoke to Newshour about barely getting by while working seven days a week.

For thousands of workers in the retail industry, working full-time doesn’t mean the security of a full-time job. Instead, many workers cobble together multiple part-time jobs with no benefits. The result, predictably, is lower wages, fewer benefits, and schedules that make life impossible for families.

But workers at IKEA are coming together in a campaign to change the corporate practices that deny workers full-time positions. The workers have gathered more than 6,000 signatures on a petition asking IKEA to offer every employee a full-time position. The workers have also taken their fight public, most recently giving an interview to PBS’s Newshour.

Dan Stillwell, a part-time worker from the IKEA store in Pittsburgh, Pa., spoke to Newshour about barely getting by while working seven days a week.

As Dan explained to Newshour, “I’d like to have one job with benefits – forty hours – to pay my bills and be able to save up for retirement. Or I won’t be able to stop working until I die.”

Dan works fifty hours each week, but is not eligible for benefits at either of his two part-time jobs. Without benefits, he cannot afford health insurance. After investing 16 years with IKEA, he only makes $9.25 an hour. But Dan’s story is familiar to many retail workers. That is why he joined IKEA workers from across the country to speak out for a union voice at work.

Dan first spoke out in an editorial to a Pittsburgh newspaper. Since then, IKEA workers have been gaining momentum in their push for full-time hours. Last month, workers from IKEA stores across the country traveled to IKEA’s North American headquarters to deliver their petition directly to the company’s top management. Now, media and economists are taking notice of the struggle of workers putting in full-time hours at part-time jobs.

You can watch Dan’s interview on PBS’s Newshour, or read more about his story in an editorial that he published in the Pittsburgh News-Gazette. To show your support for IKEA workers, sign their petition for full-time hours.