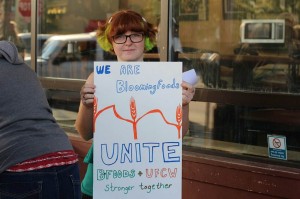 Thanks to the support of hundreds of UFCW activists, Bloomingfoods workers won the fight to have the opportunity to have a union voice on the job.

Last week, activists from around the country came to the aid of grocery workers at five Bloomingfoods Coop stores in Bloomington, Indiana as they fought for their right to improve their workplace and have a union voice on the job. Calling their campaign, “a better way forward”, Bloomingfoods workers were trying to work with their managers to improve their workplace – but management refused to work with them. When workers decided they wanted to join a union, the company called in anti-union attorney to try to persuade the workers to not join. Workers and their supporters then took action to fight for their right to have a voice on the job by starting an online petition and participating in actions in front of stores. Hundreds of people across Indiana and across the country told Bloomingfoods to live up to their values and respect their workers’ right to have a union voice. In a gesture of solidarity, UFCW coop and grocery workers nationwide reached out to Bloomingfoods workers and gave first-hand testimonials about how having a union on the job could give workers the “better way forward” they were looking for.

“I am a 22-year member of UFCW and I appreciate everything my union does for my family and myself. Everyone is entitled to decent wages and fair treatment for their work,” said UFCW member Lisa J.

“Solidarity coming from a Central Co-op (Seattle) member-owner here; any co-op aggressively opposes workers’ desire for a union is a betrayal of the cooperative spirit,” wrote grocery worker Joe S.

Late last week, Bloomingfoods announced that they would be neutral when it came to the workers choice to join a union, and Bloomingfoods workers are now working with UFCW Local 700 to ensure a fair way to a real union voice at work.

“Bloomingfoods is part of what I love most about Bloomington,” said Casie Jetter, a Bloomingfoods commissary worker. “I want the co-op to remain strong and successful so that my daughter can someday shop at the same co-op that has remained a staple in our community. Bringing a union to Bloomingfoods will put our co-op one more step ahead of competition in an increasingly competitive market.”