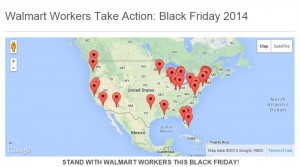 Visit the 2014 Black Friday Walmart Protests site to stand with Walmart workers and search for a action near you or learn how to host one of your own.

Just two weeks ago, protests were held in New York City, Washington, D.C., and Phoenix, Arizona, calling for Walmart’s owners, the Waltons, to publicly commit to paying associates fifteen dollars an hour and access to full-time work. Since then, Walmart workers’ petition has continued to gain support. The petition now includes calls from more than 2,000 stores, more than half of all of the Walmart stores in the U.S. Community members have also launched their own petition, supporting Walmart workers calls for fifteen and full-time, saying they will protest on Black Friday if the Waltons fail to respond to workers. The community petition has more than 42,000 signatures and continues to grow rapidly.

Information on upcoming 2014 Walmart Black Friday protests can also be found at the 2014 Black Friday Protest page here. Interested activists can search for protests near them or sign up to host a protest in their area. Campaign and Black Friday action materials such as action instructions, flyers, and petitions are also available.

Local unions are also encouraged to sign an ally letter to show support for Walmart workers on Black Friday. The deadline is October 31 and more than 130 organizations have already signed on. To be added to the letter, fill out this form to confirm that your local is signing on. The letter will be released in early November in the lead up to Black Friday. A copy of the letter is provided below.

With more than $16 billion in annual profits, Walmart can afford to pay its hard working employees enough to support their families. Instead, Walmart chooses to manipulate schedules and hours to pay the majority of its workers less than $25,000 a year, keeping hundreds of thousands of Walmart workers from covering the basics for their children and from being able to achieve the American Dream.

At the same time Walmart workers are struggling to pay their bills, the Walton family – majority owners of the company – is building its $149 billion in wealth. The Waltons are robbing American workers and taxpayers in their effort to keep the title of richest family in the country.

Walmart’s and the Waltons’ low pay business model is not just wrong; it’s holding America back.

Walmart workers like expecting mom Ronee Hinton don’t know when they will work from week to week. She recently had to rent out a room from a family friend to avoid living on the street because her inconsistent schedule at $8.10 an hour makes it impossible to plan and save for her baby’s future when she is earning less than $400 every two weeks.

As allies whose work focuses on the environment, women’s rights, faith, economic justice, civil rights and more, we believe Walmart can afford to pay more and has an obligation to do so. We are calling on Walmart to pay a minimum of $15 an hour and provide consistent, full-time hours for its workers.

As the largest employer in the country, respect and justice for Walmart associates is central to the fights we all fight every day.