Walmart Workers Bring Their Call for $15/Hour and Full-Time Hours Straight to the Waltons, 42 Arrested

On October 16th, 42 Walmart workers and their supporters made headlines when they shut down Park Avenue in front of Alice Walton’s $25 million dollar penthouse in New York City, and on K Street in front of the Walton Family Foundation in Washington, D.C. The groups called on Walmart’s owners to stop robbing workers of a fair wage and passing the bill on to taxpayers. Without a public commitment from the Waltons to raise pay at Walmart, the New York City & Washington, D.C. groups refused to disperse, boldly choosing arrest to make their voices heard.

The actions came just one day after Walmart workers and community supporters took their message directly to the home of Walmart chair Rob Walton in Phoenix, Arizona. Walmart workers delivered petitions calling on the multi-billion dollar corporation to publicly commit to raising pay to $15 an hour and to provide access to consistent, full-time hours.

“My grandkids go hungry because of low pay at Walmart,” said Sandra Sok, a Walmart worker in Phoenix. “I’ll do whatever it takes to make these billionaires and Walmart see what they’re doing to our families.”

OUR Walmart members also delivered petitions in Washington, D.C. and New York City, with worker signatures from 1,710 of Walmart stores in all 50 states. Associates are getting more sign-ons from their coworkers every day – just since events last week, signatures have been collected at almost 100 more locations, bringing the total to 1806 stores across the country.

As calls for $15 and full-time hours gain momentum and the biggest shopping day of the year approaches, elected officials including the Honorable Eleanor Holmes Norton, the Honorable Donna Edwards, and NYC Public Advocate Letitia James were among those who stood alongside workers on October 16th. They voiced strong support for Walmart workers and concern over the damage a Walmart economy has brought upon Americans across the country.

“Walmart alone rakes in $16 billion a year while enjoying $8 billion in tax breaks and subsidies, but refuses to pay employees enough to put food on the table or clothes on their back,“ said Rep. Grijalva in an op-ed last week, supporting his Phoenix constituents. “Many of their employees are forced to rely on taxpayer-funded programs, meaning the American taxpayers are paying for the Walton family’s refusal to pay a decent wage. It’s time to end this scam, and ensure all workers have the decency of a livable wage and full-time work.”

The Waltons have not commented to date, and community members say that Walmart can expect the biggest Black Friday protests to date if they fail to respond. 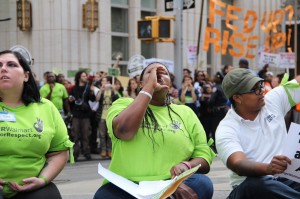 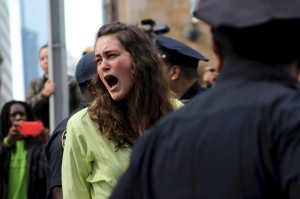 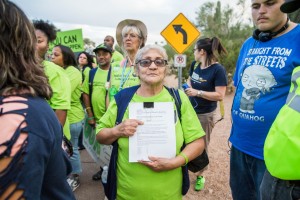 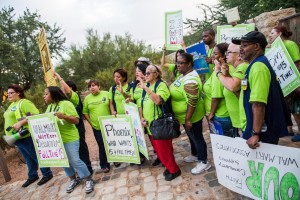 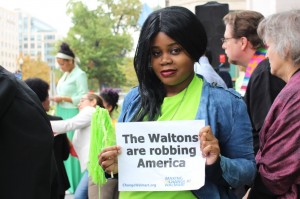 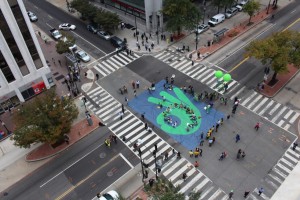