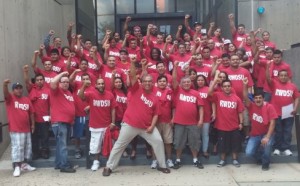 More than 120 workers at Flexon in Newark, New Jersey, overwhelmingly voted to join RWDSU Local 262 to have a union voice on the job and address problems at work.

More than 120 workers at Flexon in Newark, New Jersey, overwhelmingly voted to join RWDSU Local 262. The workers – who manufacture lawn and garden hoses sold through retailers including Target, Walmart, Home Depot, and Costco – won the union voice they sought in order to address a number of problems in their workplace.

“We were fed up and decided that we needed representation, a voice on the job and job security,” said day shift worker Heriberto Moran, who has worked at Flexon for 32 years.

Flexon employees wanted to create better jobs and reached out to RWDSU Local 262. Workers said they were tired of working for minimum wage with no annual wage increases. Workers said they would work 12 hour shifts – sometimes seven days a week – and had no benefits or healthcare plan.  The workers’ campaign flourished despite intimidation and harassment by management. Workers weren’t surprised, given the lack of respect from management that they had grown accustomed to.