OUR Walmart, Respect the Bump 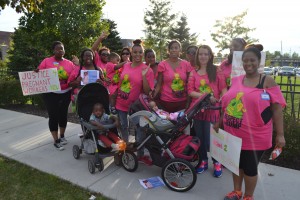 Walmart moms met in Chicago to call for Walmart to publicly commit to better pay and protections at the country’s largest employer of women.

In response to the illegal and unethical treatment of pregnant workers and the widespread financial hardship forced onto working women at Walmart, Walmart moms met in Chicago to call for Walmart to publicly commit to better pay and protections at the country’s largest employer of women. With the support of the country’s leading women’s rights advocates, the group developed a list of urgent policy changes the company must make to ensure that the women who are helping the company profit are not living in poverty or putting their health at risk.

The group also took their concerns to the Walmart store in the Chatham neighborhood of Chicago, where Walmart worker Thelma Moore was fired for the time off she took to ensure her pregnancy remained viable after an in-store accident.

“Walmart could be paving the way for good jobs for working moms like us,” said Moore. “Instead, we’re fighting for bathroom breaks when we’re pregnant and steady schedules that let us get reliable childcare and put food on the table.”

Moore recently filed an Equal Employment Opportunity Commission complaint last week about her mistreatment at Walmart. Her complaint comes on the heels of a nationwide class action lawsuit against Walmart for discriminating against pregnant mothers. 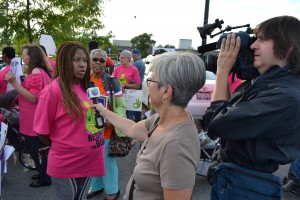