New Analysis Shows Walmart Heirs Give Less than Their Peers 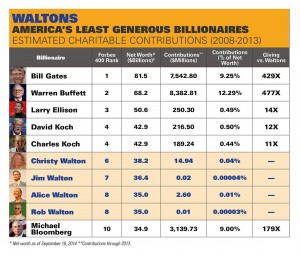 The four Walmart heirs have each contributed less than 0.05 percent of their personal net worth from 2008 to 2013 to charity.

The Walton family members are donating very little of their growing $145 billion in collective wealth. The four Walmart heirs – the top 6th, 7th and 8th richest Americans according to Forbes’s latest ranking – have each contributed less than 0.05 percent of their personal net worth from 2008 to 2013 according to a new analysis by Walmart 1 Percent.

Based on an original analysis of foundation tax returns and contribution data published by the Chronicle of Philanthropy, Rob, Jim, Alice and Christy Walton have given far less generously than their billionaire peers, ranking the lowest among the top 10 richest Americans. The Waltons, who have a combined net worth greater than prominent philanthropists such as Bill Gates, Warren Buffett, and Michael Bloomberg, receive approximately $8.6 million per day in Walmart dividends.

In comparison, the Waltons’ peers in Forbes top 10 ranking have contributed far more generously. Over the same period, Warren Buffet contributed $8.4 billion to non-profit organizations – 477 times more than the Waltons.

“I’ve worked at the Walmart store in Phoenix, Arizona, for eight years, and have done my part to help Walmart achieve more than $16 billion in annual profits,” said Walmart worker Sandra Sok. “Rob Walton lives about 25 miles away and knows what it takes to make ends meet in our state – and it’s impossible with Walmart’s poverty pay. The Walton family is showing once again that its own greed trumps the needs of American workers and society.”

A report by Walmart 1 Percent released earlier this year found that the Waltons have contributed almost none of their own wealth to the Walton Family Foundation and use the Foundation to avoid an estimated $3 billion in estate taxes. Based on an analysis of 23 tax returns filed by the Foundation, the report showed that if the Foundation is their primary vehicle for giving, the Waltons give much less generously than their billionaire peers and ordinary Americans.

While the Waltons – the richest family in the country and the majority owners of Walmart – add to their more than $149 billion in total wealth, Walmart workers and shoppers across the country have been calling on the Waltons to publicly commit to pay fair wages to the workers that have helped them amass their profits.  The group has also called on the Waltons and the company to stop cheating taxpayers out of more than $7.8 billion in subsidies and tax breaks each year.

Find more information on the Walton family, the majority owners of Walmart, at http://www.walmart1percent.org.