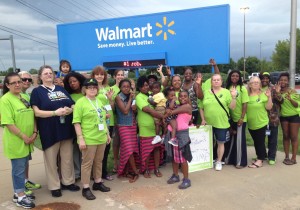 Public Citizen, Common Cause, and two Walmart employees and shareholders filed a charge with the Federal Elections Committee alleging that Walmart illegally pushes associates into contributing to its political action committee.

Groups are alleging that Walmart illegally pushes associates into contributing to its political action committee, circumventing a federal law that bars companies from putting corporate funds into political campaigns.

Public Citizen, Common Cause and two Walmart employees and shareholders have  filed a charge with the Federal Elections Committee. In the complaint, the two employee-shareholders, Cynthia Murray and Evelyn Cruz, allege in detail a program in which Walmart reportedly solicits the company’s managers to donate to Walmart’s PAC. In exchange, Walmart reportedly pledged to donate twice the amount of those contributions to its Associates in Critical Need Trust.

This complaint argues that this program is illegal under the Federal Election Campaign Act, which bars companies from making contributions to federal candidates, parties, or PACs.

Craig Holman, government affairs lobbyist for Public Citizen noted that, “WalMart is attempting to evade this law by providing a 2-to-1 charitable match from corporate coffers for any campaign contribution to its PAC from company managers. That flouts the law by using substantial corporate money to reward campaign contributors.”

In the past, the FEC has approved some charitable matching schemes, but those programs have been limited to a 1-to-1 match or less, with each donor choosing the benefitting charity-not the company as in this case.

Murray, who has worked at a Walmart store in Laurel, Md., for 15 years and owns shares in the company, pointed out schemes like this are a fundamental challenge to our country’s democracy:

“Multibillion-dollar corporations like Walmart are able to skirt the rules that the rest of us follow. With the majority of Walmart workers being paid less than $25,000, it’s not surprising that Walmart needs to set up a fund to help employees in need. Most of us are in need every day. With more than $16 billion in annual profits, Walmart can afford to pay us more instead of paying expensive lawyers to help them manipulate electoral laws and taxpayers.”

Like Murray said, data from Open Secrets shows that since the 2000 election cycle, Walmart’s PAC has spent over $13 million on federal elections, which has gained the company outsized influence on our democratic process.

Additionally, the Walmart PAC has given more than $2.5 million to members of the U.S. House of Representatives who opposed increasing the minimum wage to $10.10 last year. Among House members who voted on the proposed minimum wage increase, nearly two-thirds of the Walmart PAC’s contributions went to those who voted no.

The Washington Post has reported that Walmart’s lobbying disclosures suggest it started lobbying last year on the minimum wage and Fair Minimum Wage Act, despite public statements that it is “neutral” on the issue.