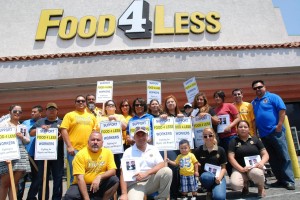 Members reported that during negotiations, the company was pushing for changes that would undercut worker rights, including cutting the number of full-time jobs and cutting funding for healthcare expenses. Food 4 Less dropped its demands after seeing that employees were standing strong against any changes that could hurt workers.

Through social media, UFCW Local 135 President Mickey Kasparian credited the ratified contract to the “unwavering solidarity” of the membership, and thanked customers and the public for supporting Food 4 less workers during their contract campaign.

“Thanks to the support of consumers and our members’ resolve, we have reached a tentative contract deal that protects employees’ wages, hours, and health care. We would not have been able to accomplish this without the backing of the public and all our members,” said UFCW Local 770 President Rick Icaza.