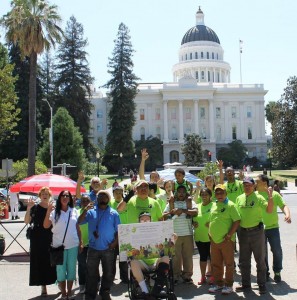 OUR Walmart members lobby at the California state capitol in support of paid sick leave for workers.

After intense lobbying from UFCW members and members of OUR Walmart, both houses of the California legislature have passed a bill guaranteeing workers up to three paid sick days a year.

The legislation includes part-time and temporary workers, making it one of the strongest in the nation. Home health care workers are exempted. Governor Jerry Brown has indicated he will sign the bill into law.

About 40 percent of California’s workforce is currently not eligible for paid sick days. Across the state, retail workers successfully made the case that no one should be forced to risk their job and their livelihood just because they get sick.

The United States is the only developed country that does not guarantee paid sick leave to workers. Late last year, Rep. Rosa DeLauro (D-CT) introduced the FAMILY Act, a bill to create a national paid family and medical leave insurance program. House Republicans have refused to bring it up for a vote.

In the meantime, UFCW members, OUR Walmart, and their allies will continue to push for action at the state and local levels.