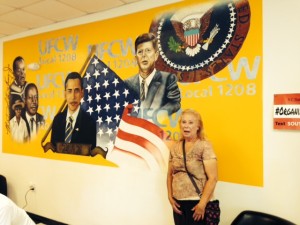 UFCW Local 1208 member Patricia Bryant takes action with her fellow union members in support of Mountaire Farms poultry workers having a union voice on the job.

Patricia Bryant is a UFCW Local 1208 member who currently works at a Smithfield Foods plant in North Carolina. Before she came to Smithfield, she worked for a year at the nearby Mountaire Farms poultry plant. She is now actively involved in the campaign to help workers at Mountaire Farms have a union voice because she has experienced first-hand how bad the conditions there are.

Bryant has participated in two of the UFCW Local 1208 organizing actions at Mountaire, and she also recently attended a gathering of Mountaire Farms workers in which actor Danny Glover came to speak in support of them.

“It’s fun,” she says of the actions. “When my friends see me wave and fighting for them, hopefully they’ll see that there’s something better on the other side when you are a union member,” Bryant continued.

“Mountaire Farms workers face a lot of hardships compared to workers at Smithfield Foods including lower pay and a poor benefits plan.  My friends have families that they are trying to support and everyone has bills to pay. If they are able to see a light at the end of the tunnel, I have to fight for them. These are good people. They work hard every day, but the industry tends to forget that workers are people, and not just a number. That’s why I’m yelling and pounding the pavement at these actions.”

Bryant also notes that the managers at Mountaire Farms make it hard for the four main ethnic groups at the plant–Mexican, Haitian, African American, and Caucasian–to stand together or in some cases even communicate.

“The Haitian workers speak French, but the company fired their translator so now no one in the plant can talk with them,” she says.

That’s why those helping the workers at Mountaire to unionize are trying to connect with each group about issues that matter to them. Now, people from all backgrounds are coming out to meetings to learn about being part of a union and fixing the problems at work.