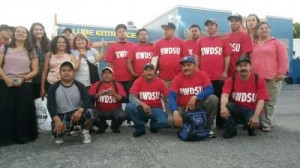 Workers at the K&P Car Wash in New York City voted overwhelmingly to join the RWDSU.  They are the ninth car wash to vote to have a union voice since the WASH New York campaign began more than two years ago.

WASH New York, a joint effort by New York Communities for Change, Make the Road NY, and supported by the RWDSU, has worked to clean up the car wash industry and improve conditions for the workers. The car wash workers are mostly immigrants who make minimum wage or less and who often have been denied overtime pay to which they are entitled by law.

To discourage K&P Car Wash workers from voting to join the RWDSU, car wash owners who are members of the Association of Car Wash Owners shut down the K&P Car Wash in the middle of the work day to hold a meeting with workers and urge them not to unionize. Steve Rotlevi, the head of the Association of Car Wash Owners delivered an anti-union speech which, workers said, made them fearful of reprisals if they exercised their right to join the union. One of the workers said the owners also threatened to shut the business down rather than negotiate with the RWDSU.

“Even in the face of threats and intimidation, these workers understand the value of a union job that ensures decent wages and a safe workplace. I stand proudly behind the workers at the K&P Car Wash and their decision to join RWDSU so they can provide a better livelihood for their families and communities,” said City Council Member Ritchie Torres.