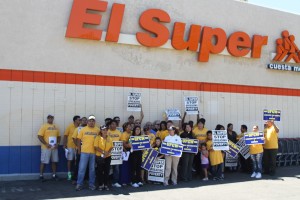 On July 23, hundreds of UFCW members and their supporters joined workers from El Super stores throughout Southern California in a bus tour that brought protests to 37 of the chain’s stores in a single day. Protests were held in support of El Super workers as they continue to fight for a good contract. Workers have been without a contract since September 27, 2013.

The day of action began in the early morning hours and culminated in hundreds attending a rally at El Super’s regional headquarters in Paramount, Calif., a largely Latino community about ten miles east of Los Angeles.

Members from UFCW Locals 135, 324, 770, and 1167, participated in the day of action that was designed to keep the pressure on El Super management as negotiations appear to have stalled weeks after the stores union employees voted for strike authorization in June.

Wages, paid sick days, and respect on the job have topped the list of issues that union negotiators have pushed hard to advance for months but have run into “a brick wall of indifference on the part of El Super management,” according to UFCW Local 324 Secretary-Treasurer Andrea Zinder.

Despite the company’s apparent unwillingness to compromise, workers at the chain’s union stores have not backed down. They have continued a near constant drum beat of pressure aimed at store management that has included everything from rallies in store parking lots to petition drives. Seven of the company’s 44 U.S. stores are union as a result of the Mexico-based retailer’s purchase of Gigante’ in 2008.