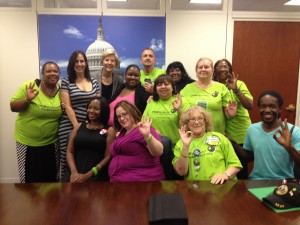 Former Walmart worker and OUR Walmart member Tiffany Beroid delivered testimony at a Capitol Hill briefing on the day that U.S. Reps. George Miller and Rosa DeLauro introduced legislation to tackle problematic scheduling practices affecting part-time workers. Beroid testified about how Walmart’s unpredictable scheduling policy made it impossible for her to go to school, despite the company’s public commitment to support associates’ efforts to improve their lives.

The legislation—the Schedules that Work Act—is designed to ensure that workers like Beroid have a voice in their work schedules, the predictability and stability they need to meet the dual demands of work and family, and a fair shot at achieving economic security for themselves and their families. Walmart—the standard-setter for jobs in the retail industry–has created an unfair norm of erratic, part-time scheduling, preventing low-wage workers from holding down second jobs, arranging child care, going to school or managing health conditions.

Tiffany Beroid worked at Walmart in Laurel, Md., for about three years as a customer service manager. When she started going back to school so she could build a better life for her kids, Walmart cut her hours so drastically that she had to drop out of school because she couldn’t afford it. Then, after she spoke out about the problems she faced, Walmart illegally fired her.

“I started working at Walmart because I thought if I worked hard, I could give my family a stable home and lift us out of poverty. Instead, Walmart did everything it could to keep us in poverty and keep me from getting an education,” Beroid said.

“I stood up and said we shouldn’t face problems like this working at a company that brings in $16 billion in profits a year—when all we want is more hours and decent pay so we can support our families. And then Walmart fired me for speaking out.”

Beroid also discussed how OUR Walmart recently won various store-level scheduling and hours victories that led Walmart to roll out a new system nationwide that allows associates to sign up for open shifts in their stores. The victory shows the influence OUR Walmart has at the country’s largest employer, but Walmart has failed to inform many associates about the new program, and the system doesn’t address predictability in scheduling or the need for full-time hours.

Beroid is one of the majority of Walmart workers who are paid less than $25,000 a year. Many of them work part-time, relying on unpredictable schedules and must depend on food stamps and other taxpayer-supported programs to survive. Even though Walmart is supposed to give workers their schedules three weeks in advance, they are often late and shifts are added at the last minute. When workers stand up and opt out of open availability by putting modest restrictions on their schedules for important commitments, Walmart often retaliates by excessively cutting back hours.

Working women make up the majority of Walmart’s workforce and are often hit hardest by the company’s poverty pay and erratic scheduling practices. A group of Walmart moms went on strike earlier this summer in protest of the company’s illegal retaliation against co-workers who have spoken out for better jobs. Detailing the widespread problems Walmart women face on low-pay and erratic scheduling, national public policy organization Demos released a report earlier this summer showing how these conditions keep millions of hard-working women and families near poverty. The report finds that establishing a new wage floor equivalent to $25,000 per year for fulltime, year round work at retail companies employing at least 1,000 workers would improve the lives of more than 3.2 million female retail workers and lift 900,000 women and their families directly out of poverty or near poverty.