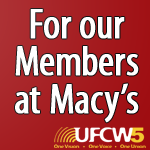 One of the key issues in the talks is the company’s demand to cap commissions for existing salespersons and eliminate them altogether for new hires.

Carol Harrison-Fine is a 32-year member at the Union Square store in the Ralph Lauren department. “Macy’s workers pride ourselves on professionalism and product knowledge. The company’s demand to eliminate our commission structure would doom future workers to a life of poverty and over time, make us more like Walmart than the great company that we have helped to build,” she said.

Other issues in dispute include an erosion of seniority scheduling rights, tying future wage increases to unreasonable sales quotas, and a company demand to cease payments into the employee pension plan.

The President of UFCW Local 5, Ron Lind, said, “For decades, Macy’s union associates in San Francisco have set the standard for retail workers with respect to earnings, seniority and scheduling rights, and dignity on the job. The company’s contract offer undermines that tradition in a way that our members cannot and will not accept.”

Lind reported that the union, having received strike authorization from the members, is now seeking strike sanction from the international union and the San Francisco Labor Council. “We have informed the federal mediator of the outcome of the vote and given the overwhelming rejection, what we see as an obvious need to return to the bargaining table,” Lind continued.

Macy’s has yet to respond to the union’s offer to resume negotiations. In the meantime, strike preparations have begun while workers stay on the job under a contract extension. No timeline for a dispute has been set.