In a concerted effort to ensure that all Kroger workers have the right to join a union, without coercion or interference from their employer, UFCW Locals across the country are stepping up to support Local 400 members with online and on-the-ground actions.

Current Kroger members from coast to coast are standing with those at newly-opened “Marketplace” Kroger locations in eastern Virginia, using the hashtag #KrogerStrong, and sending messages of solidarity and encouragement as the new Virginia stores prepare for contract negotiations. 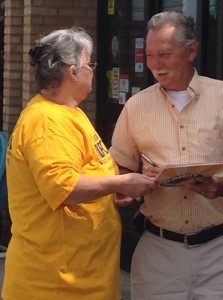 Deb, a UFCW Local 23 member talking to a customer outside her store in Ohio.

Last Thursday, during Kroger’s annual shareholders meeting in Cincinnati, Ohio, Local 400 Kroger members, customers, community and labor allies shared their message with Kroger, calling for an end to the chain’s anti-worker campaign at the Marketplace stores.

In the days leading up to Kroger’s shareholder meeting, Kroger members nationwide, customers and allies signed an online petition, which has over 500 signers, supported a digital Thunderclap that saturated social networks by pushing out over 200 tweets and Facebook posts generating a total reach of 110,000 people, making their voices heard.

During the shareholder meeting, Kroger members and customers took to Kroger’s Facebook page in real time, sharing messages of support like one UFCW Local 23 member who posted, “I worked at Kroger in the past and it was a good company! It is sad to see the path it is taking. Walmart models of business are NO GOOD for America!” Followed by another supporter who wrote, “Kroger please stop treating your employees as an expense and start treating them like the great investment they are.” A loyal Kroger customer then added, “I have always supported the Kroger company and encourage many of my friends to do their shopping there. I hope that Kroger will rethink what they are doing to their employees who have come to know me by name.”

Simultaneously, these digital actions were met with storefront actions throughout Virginia, West Virginia, Kentucky, and Ohio garnering support from loyal customers, who where asked to stand with workers by signing a support card and turning it in to the manager on duty.

To support these Kroger workers, members can sign the petition here.