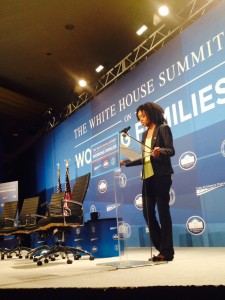 Kim Mitchell, who works at Macy’s in Washington D.C., attended the summit to bring attention to the union difference in the retail industry.  As the result of a strong union contract between Macy’s and its workers, Mitchell has been able to live comfortably and support her family. Mitchell, who is a single mother, earns $20 an hour and benefits from “predictive scheduling” which helps ensure her hours are both adequate and predictable.

“I am here with a simple message—union jobs are the best jobs,” she said. “My membership in the UFCW has allowed me to achieve my dream of financial security and peace of mind. That contract is more than a document to me—it’s my family’s livelihood.”

“I am glad the President is focusing on these important issues,” Mitchell said. “I am here to tell the White House that the best way to help workers is through a union contract. Strengthening the right to organize and bargain collectively should be at the top of any plan to lift up working families.”

Also attending the summit were a group of “Walmart Moms” who are speaking out for fair wages and respect on the job. Many of them were on strike earlier this month calling on the mega retailer to end retaliation against workers who speak out to improve the workplace.

“Millions of workers, especially working women, have stories similar to mine,” said Bene’t Holmes, a Walmart worker and single mother from Chicago. “They are trapped in a cycle of low wage jobs with unpredictable hours that make it so difficult to raise a family. My hope is this event will help elevate the ongoing national conversation about making today’s workplaces better for everyone, including working mothers like me.”

The financial struggles of Walmart moms, like many women who are increasingly the breadwinners for their families, are disproportionately impacted by the low-wage worker crisis. Even though Walmart brings in more than $16 billion in annual profits, the majority of Walmart workers are paid less than $25,000 a year – forcing many to rely on food stamps and other taxpayer-supported programs to survive.

Charmaine Givens-Thomas also attended the summit and launched a petition last year asking President Obama to make good on his promise to tackle income inequality and meet with Walmart workers that are calling for better jobs and an end to illegal retaliation. The petition has over 200,000 signatures.

“Walmart moms like me are living the reality of the income inequality the president has been talking about,” said Givens-Thomas, a mother and grandmother who has worked at Walmart for over eight years and only makes $23,000 a year. “We want the president to meet with us to hear how Walmart is fueling the income equality crisis—and how the company could easily fix this problem.”