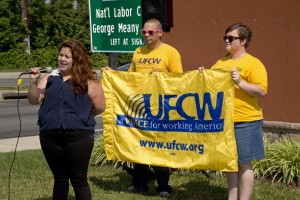 UFCW Local 400 and the Labor Council for Latin American Advancement (LCLAA) joined together with elected officials and community supporters in Maryland to kick off a week-long education campaign aimed at bringing awareness to area employees on the new minimum wage laws, set to take effect Oct. 1, 2014. The campaign will run from June 16 through June 20.

“Jobs should lift workers out of poverty, not trap them in poverty,” said Executive Director of LCLAA Hector E. Sanchez. “While we celebrate this important victory, we recognize that Latino workers suffer more minimum wage and overtime pay violations than any other ethnic group. That is why we have joined this critical tour to ensure Latinos are not robbed of their hard-earned wages. We want to make it clear to employees and employers that paying what the law requires is not negotiable.”

“I’ve worked my entire life, so I know how hard it is to try and make ends meet, especially off minimum wage,” said Jacqueline Midence, a Subway worker. “When you’re supporting your family, every cent helps you survive. The new law will help people like me live better, it will give us more hope for the future.”