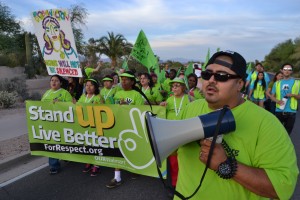 Dozens of striking Walmart workers were joined by UFCW Local 99 and community supporters as they held a candlelight vigil
outside of Walmart Board Chair Rob Walton’s home in Ariz., calling on Walton to respect workers’ rights or resign.

Last week, Walmart moms led workers on strike against Walmart’s silencing of workers in 20 cities nationwide. These strikes, in conjunction with growing calls for change from within the company have caught the attention of Walmart shareholders and customers alike. Amidst protests by striking workers, many shareholders voted against the election of directors, increases in executive pay, for an independent board chair, and increased transparency around lobbying and when executive pay is “clawed back.”

The actions started last week in Phoenix when dozens of striking Walmart workers, community supporters, and area faith leaders called on Walmart Board Chair Rob Walton to respect workers’ rights or resign. Walton, the oldest son of Walmart founder Sam Walton, is head of the richest family in America and lives in an exclusive neighborhood in Paradise Valley, Ariz. Anchored by UFCW Local 99, a broad coalition of community supporters came together to support the Walmart workers as they pushed for change.

Over a hundred workers and community members met for a forum on inequality at a synagogue around a mile from Walton’s home. Then, they marched to Walton’s house where they held a candlelight vigil asking for an end to the retaliation against Walmart workers. The next morning, they rallied at the entrance to Walton’s neighborhood, informing his neighbors that one Paradise Valley resident can make a change in the life of millions of Walmart workers. After taking their concerns directly to Rob Walton in Phoenix, many Walmart moms traveled to Bentonville to the company’s annual shareholders meeting to call for an end to retaliation and a new direction for the company.

Following the Phoenix action, Walmart moms and members of OUR Walmart continued to take action and went on strike in cities across the country to protest the company’s illegal silencing of their co-workers who have been calling for changes, including better pay.

Walmart moms went on strike in Orlando, Dallas, Pittsburgh, Southern California and the Bay area in the first wave of actions. More strikes followed and took place outside stores in 20 cities including Tampa, Miami, Chicago, Milwaukee, Minneapolis, Los Angeles and the Bay area, and Washington, D.C.

The protests and strikes also come at an important moment for the company. Still under scrutiny for alleged violations of the Foreign Corrupt Practices act, Walmart is also facing a lawsuit by the National Labor Relations Board for illegally punishing and firing more than 60 workers who went on strike during its shareholders meeting last year.

Held on June 6 immediately following the nationwide strikes, Walmart workers’ voices were heard at Walmart’s annual shareholders meeting. As a result of the actions and workers’ calls for change, analysis of an early release of vote counts from the shareholder meeting show an increase in independent investor votes against current leadership of the company and opposition to its executive compensation package. The results also show an increased support for shareholder-proposed changes in governance and compliance for the company.

While majority control of the company by the Walton family has prevented the advancement of key issues, the increase in independent votes demonstrates the growing unrest from shareholders.

Specifically, independent votes against the ‘Say on Pay’ resolution, increased dramatically to 35.0% in last week’s vote, up from 3.4% in 2013. The “Say on Pay” resolution asks shareholders to ratify an executive compensation plan that has awarded company executives millions of dollars in bonuses. The largest shareholder advisory firm – Institutional Shareholder Services – encouraged shareholders not to support this year’s package because of the many adjustments that boosted compensation and separated pay from performance.

A group of Walmart workers who are OUR Walmart members and shareholders also opposed the measure. Charmaine Givens-Thomas, a member of the group who spoke on the floor of the meeting on Friday, said of the “Say on Pay” vote:

“Associate shareholders are tired of seeing executive pay continually rising when return on investment keeps falling and a majority of our Walmart employees associate colleagues are paid less than $25,000 per year. This unjustified pay gap demoralizes employees, especially when shoppers are already saying that the low pay and disrespect of workers is keeping them from shopping at Walmart stores.”

Shareholder resolutions for changes in company governance also saw promising and increasing support. In only its first year at Walmart, a proposal that would require Walmart to report yearly on its lobbying activities, including through trade associations and organizations that write model legislation, received 28.3% of non-insider votes.

With nearly 40% of support (39.6%) from independent shareholders, the independent chairman shareholder proposal had a four point increase from 35.6% last year. This proposal, would ensure the company has leadership that is unbiased about management and represents shareholders without conflicts of interest.

A “clawback” disclosure proposal from Amalgamated Bank, the Illinois State Board of Investment and UAW VEBA received 37.8% of the vote from independent shareholders. This proposal would require Walmart to disclose whether it has taken back pay from executives whose actions have caused significant financial harm to the company and its shareholders.