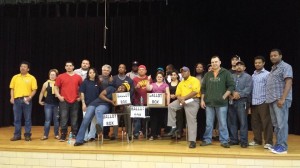 “This is a great agreement, not only for JBS workers but the entire Worthington community,” said MikePotter, President of UFCW Local 1161. “This contract means that more than $23 million dollars will be pumped into the local economy over the next five years. Much of our time at the bargaining table was spent working to protect affordable, quality health care. Thanks to the unity of the union membership, and the solidarity shown to us by other UFCW local unions around the country, we were able to hammer out an agreement that keeps workers healthy at a cost that doesn’t threaten the family budget or the company’s ability to grow and make a profit. Negotiations were tough, but ultimately, this agreement shows that sticking together in a union means your voice is heard and respected at work.”

• Provide wage increases of 12.8% over the life of the five year agreement.
• Include retroactive pay for all hours worked since the expiration of the previous contract. The previous contract expired on June 30, 2013.
• Maintain affordable health care costs for employees with only minor plan changes.
• Establish a low-cost health care clinic in Worthington which means flexible, easily accessible health care to JBS employees with no cost for primary care (checkups, some treatments, minor procedures, and lab work) and low cost prescriptions and immunizations.
• Improve paid leave for the death of a loved one.
• Retain double time on Sunday and time and a half pay on 6th consecutive day worked.
• Retain current 401 K plan.

More than 1,800 people work at the facility slaughtering hogs and processing and packaging pork products. Workers have been at the bargaining table for more than eleven months. In early May, in an effort to protect health care, workers authorized a strike if one became necessary. JBS workers from across the country also engaged in united actions designed to show JBS that preserving affordable health care was an important priority for their families.

The UFCW represents JBS workers at several other locations around the country. Workers are currently at the bargaining table in Greeley, Colo.; Souderton, Penn.; Grand Island, Neb., and Louisville, Ky. Workers in Omaha, Neb., will begin negotiations in the coming months.