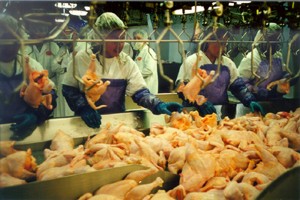 UFCW members can contact their Congressional representative and ask them to not support funding for the poultry rule that will increase line speeds and could harm workers and consumers.

The USDA is set to publish a rule that would put workers in poultry plants at further risk of injury while slashing oversight and exposing consumers to harmful contaminants.

The poultry industry wants to double the speed at which birds are processed, despite a recent study by the National Institute for Occupational Safety and Health showing that 42 percent of workers have evidence of carpal tunnel syndrome at current line speeds. And it’s not just poultry workers who will be hurt by this industry-backed measure. Under the new rule, poultry companies will be largely responsible for their own inspections, a change food safety advocates say would unnecessarily endanger consumers.

But Congress still has time to act. UFCW members are urged to contact their representatives and tell them to stop the implementation of this reckless rule.

If implemented, the poultry rule would sacrifice the safety of workers and consumers for the sake of the poultry industry’s profits. That is why members need to support Congresswoman Rosa DeLauro’s amendment to the Agriculture Appropriations bill that would prevent funds being used for this purpose.
Working conditions in poultry plants are already dangerous, and speeding up lines without proper staffing levels would make matters worse.

Members can visit http://bit.ly/poultryrule to send a message to their representatives telling them to support DeLauro’s Amendment and halt this dangerous rule.