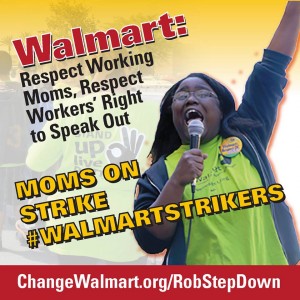 Walmart moms are walking off the job in
protest of illegal firings of co-workers.

Walmart moms announced last week that many will walk off the job in protest of the illegal firings of co-workers who have been calling for more hours and better pay. This Friday, OUR Walmart members will take their concerns and calls for change directly to the company at its annual shareholders meeting and to board chairman Rob Walton.

Workers plan to walk off the job in more than 20 cities nationwide throughout the week. Citing the company’s retaliation against workers, striking Walmart moms will join fellow workers, families, and community supporters nationwide who are calling on new Walmart CEO Doug McMillon to take the company in a new direction, one that will respect workers’ rights and help strengthen families and the economy. Locals who are interested in participating in an action can visit http://bit.ly/1kFuldD for more information.

The annual shareholders meeting will begin as Walmart workers make significant strides in changing policies of the country’s largest employer, particularly in its treatment of women. Recently, Walmart improved its pregnancy policy after OUR Walmart members, who are also shareholders, submitted a resolution to the company about its pregnancy policy. Walmart rolled out a new system nationwide that allows workers to sign up for open shifts in their stores online in response to OUR Walmart members’ growing calls on the retailer to improve access to hours.

“We know that change is possible at Walmart. That’s why I’m joining other moms at Walmart and going on strike. We have the right to speak out for better futures, and when we do it together—we make progress,” said Lashanda Myrick who is a mother of two and works at Walmart’s Denver store No. 2752. “But when Walmart continues to fire my co-workers for standing up for good jobs and hundreds of thousands of us are paid less than $25,000 a year, there’s more work to do.”