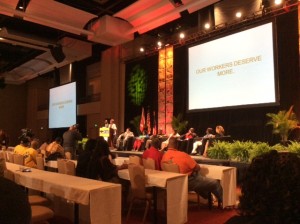 During the CBTU International Convention, OUR Walmart
member Brandon Garrett was a featured speaker at a town hall meeting about the struggles of workers trapped in low-wage jobs.

The Coalition of Black Trade Unionists (CBTU) held its 43rd International Convention last week in Atlanta, Ga. The convention started on Thursday, May 22 with a Town Hall Meeting, “Overworked and Underpaid: The plight of low-wage workers.”  The town hall meeting focused on the increasing number of workers that are trapped in low-wage jobs.

OUR Walmart member and Organizing Institute organizer Brandon Garrett was a featured speaker during the town hall. He talked about wage inequality and how Walmart workers are standing together to call on Walmart to make jobs at the mega-retailer better jobs.

The opening town hall meeting was a kick start for the rest of the convention that focused on issues that impact African American workers, including wages, on the job health and safety,  mass incarceration, public education, voter suppression, ACA, and wage inequality. More than 800 delegates attended the convention, including several African American labor leaders. The UFCW Minority Coalition also held its Summer Board meeting during the CBTU Convention. OP