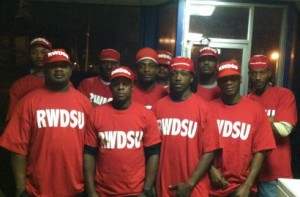 Sanitation workers at a Tyson poultry plant came together to join RWDSU Southeast Council to have a union voice like the RWDSU members who currently process poultry in the same plant.

The poultry processing workers at the Tyson plant are already members of the RWDSU and played a critical role in assisting QSI Contract Sanitation workers win a union voice. After speaking with their RWDSU co-workers, QSI workers realized the only way they could resolve the lack of a grievance procedure and improve their jobs was by joining a union and negotiating a union contract.

“We couldn’t have done this without the support of the RWDSU Tyson steward leadership and members,” Burke continued.