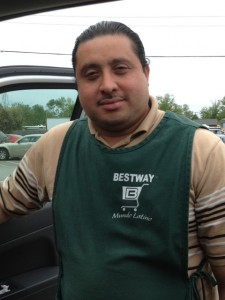 Luis Manzaneres served as a union election observer for his fellow Bestway workers.

Last week, workers at a Bestway Supermarket in Mt. Vernon, Va., voted UFCW Yes, becoming the third Bestway store in the region to join UFCW Local 400. The workers’ activism began when the workers stood in solidarity this past October with coworkers at a Falls Church Bestway store who were illegally fired in retaliation for forming a union. The Falls Church workers picketed the store for nine days, uniting customers and other area Bestway workers in their cause before successfully reaching an agreement with Bestway to reinstate the workers and set guidelines to begin negotiations for their first contract.

Despite previous union victories, the Mt. Vernon workers are facing an employer that continues to fight its workers. Bestway management has challenged the results of the NLRB election, an action that has only served to strengthen the solidarity of workers within the store.

“We are very happy with our victory here at Bestway, Mt. Vernon and I thank all my coworkers who showed unity through the election process,” said Luis Manzaneres, a worker at the Mt. Vernon store who served as an election observer on behalf of his coworkers. “We hope to God to sit at the bargaining table very soon to start negotiating our first contract. We are ready!”