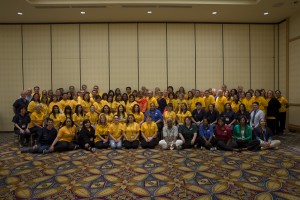 UFCW members are part of the Coalition of Kaiser Permanente Unions, which includes nearly 100,000 members from 30 different unions. The coalition was formed in 1997 as a way to transform the relationship between workers and managers. The partnership involves workers, managers, and physicians in a joint decision-making and problem-solving process that is based on common interests from all parties. Workers covered by the partnership include registered nurses, pharmacists, maintenance and service workers, technicians, psychologists, lab scientists, and many others.

The Union Delegate Conference is also an opportunity for UFCW members to participate in collective bargaining with other unions who are part of the coalition. The entire coalition bargains together as a whole for their contract. Next year, the Union Delegate Conference will focus on collective bargaining and negotiations for their new contract since the current one is set to expire in July 2015.