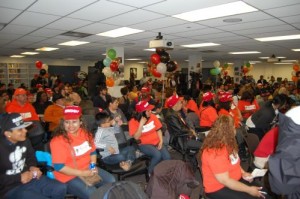 New York City elected officials, including Mayor Bill de Blasio, told RWDSU “carwasheros” that they support their right to join a union and their fight for economic justice.

Top elected officials, including Mayor Bill de Blasio, Attorney General Eric Schneiderman, and City Council Speaker Melissa Mark-Viverito, told some 200 “carwasheros” and their advocates that they support their fight for economic justice and the right to join a union.

In the two years since the Wash NY campaign began with the support of New York Communities for Change, Make the Road New York, and the RWDSU, workers at eight car washes have voted to unionize and have won contracts at six locations.

The three-year contracts include wage increases, job security, fair scheduling, protection of their tips, personal days and paid holiday bonuses for Christmas and New Year’s Day. Workers have been motivated to organize by unfair labor practices and bad working conditions, which have been found at car washes across the city, including below-minimum-wage pay and wage theft.

This Car Wash Worker Assembly began because the carwasheros decided to have one day out of year to come together, celebrate the victories of the campaign and set goals for the year.

One topic of the Assembly was the recent $3.9 million settlement between Attorney General Schneiderman and car wash owner John Lage over unpaid wages, and underpayments of state unemployment and workers compensation benefits on his workers’ behalf.

The campaign won successful strikes at the Sunny Day Car Wash in the Bronx, and Jomar and Off-Broadway Car Washes in Queens, saved the jobs of workers at the Soho Car Wash, secured six union contracts and brought about significant change in how workers are treated, even at non-union car washes.

“We are here at our Assembly today because united we are stronger,” said Ernesto Salazar, an El Salvador native who works at Webster Car Wash in the Bronx. “We are here with the most powerful people in New York City to ask them to continue to support us and to show that we are not alone and we will win!”

Another worker, Miguel Portillo, who works at Jomar Car Wash in the Bronx, said, “This Assembly is very important to us. We want all carwasheros in New York City to come together and join our fight. When we have every carwashero fighting, I know we can win. We can win more than we can imagine.”

Organizers also spoke about the Car Wash Accountability Act, which Speaker Mark-Viverito has introduced in the City Council. It would require licensing, transparency and best-practice standards. Car washes would face stiff penalties for fraud, misrepresentation or other violations. Charitable groups and others that conduct car washing to raise money would be exempt.