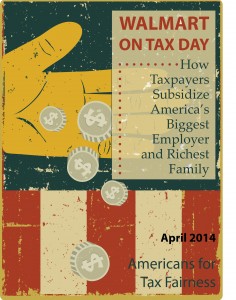 Walmart workers and taxpayers in Phoenix delivered a $7.8 billion tax bill to Rob Walton, Walmart Chairman, in reaction to the news that the country’s largest retailer and richest family received an estimated $7.8 billion in tax breaks and subsidies in 2013. A report released yesterday by Americans for Tax Fairness showed how Walmart and the Waltons dodged taxes, exploited loopholes, and took advantage of taxpayer subsidies, while many of its workers were forced to rely on taxpayer-funded programs like food stamps and Medicaid. The full report can be read at http://bit.ly/WMTaxes.

The taxpayers hand-delivered the bill to Walton’s home in Paradise Valley, outside Phoenix.

“Like most Americans, I work hard, pay my taxes and play by the rules. Why can’t America’s richest family pay their fair share of taxes like the rest of us,” said Venanzi Luna, a Walmart worker who undersigned the bill. Walmart made a $16 billion profit in 2013, and the six Walton heirs, who own more than 50% of Walmart shares, saw their wealth grow to $148.8 billion—more wealth than 49% of American families combined.

The report by Americans for Tax Fairness found that, “…the American public is providing enormous tax breaks and tax subsidies to Walmart and the Walton family, further boosting corporate profits and the family’s already massive wealth at everyone else’s expense.”

The breakdown provided in the report showed where the estimated $7.8 billion in subsidies and tax breaks occurred.

“Many Walmart workers like me are struggling to cover the basics even though we’re working at the country’s largest employer,” said Anthony Goytia. Goytia has been working at Walmart for two years and sometimes relies on food stamps and Medicaid because he is not getting the hours he needs.

“Even though Walmart is making $16 billion in profits, the Waltons seem to think the American people should be providing them another $8 billion in tax breaks. When the richest family in America isn’t paying its fair share, it’s no wonder that our children’s schools, our roads and basic public programs are getting cut left and right.”

Marketplace recently revealed that Walmart is the biggest beneficiary of the Supplemental Nutrition Assistance Program, otherwise known as food stamps. Walmart takes 18% of all food stamp dollars-or $13 billion in revenue.